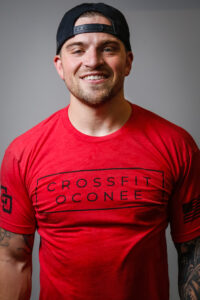 Jeremy began on his path to fitness shortly after becoming a fire fighter with Gwinnett County in 2011. He has obtained his Crossfit Level 1 certification and attended multiple classes to help further his knowledge of fitness. “I never played sports growing up so I was never really introduced to that competitive atmosphere. I did the whole “bi’s & tri’s day, chest & back day” thing for a while and quickly became bored with it. Out of curiosity one day I gave a CrossFit gym near my home a try and from that day on I was hooked! My favorite part has been the family like feeling and the competitive drive it gives you day in and day out. Being even a small part of helping someone achieve a goal or a certain level of fitness they’re aiming for is very rewarding!"

Accomplishments: Competed in the 2015 and 2016 CrossFit Atlantic Regionals