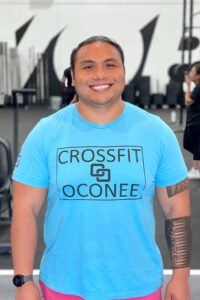 I was born in the Philippines and lived there until the age of 8, then I moved to the United States of America. I quickly became obese (240lbs @ 10 years of age) due to the easily accessed food. After realizing that I was unhealthy and over-weight, I began my fitness journey at the age of 10 years old. I began with the traditional body-building while competing in sports like football, basketball, track and mixed martial arts. Body building led me to compete in powerlifting for 2 years. After a few meets, I was introduced to Olympic weightlifting, and soon after I started CrossFit in 2014. I specialize in functional fitness, Power/Olympic weightlifting, and mixed martial arts. I hold various belts in Taekwondo, Karate, Brazilian Jiu-Jitsu, and Judo. I had a few bouts in kickboxing and Muay Thai. I used to instruct events held annually for kids in mixed martial arts.

My body has seen its fair share of traumatic injuries, a lot came from poor coaching which led to my goals, show people how to improve their quality of life through PROPER functional exercise and nutrition. I am currently pursuing B.S. in Kinesiology with an emphasis of Sport and Nutrition at North Georgia while coaching at 4 amazing gym communities.